It’s fascinating to me that our materials are used around the world. I have enjoyed working with educators in Canada, Spain, Australia, Guadeloupe, and China, and I am currently working with a teacher, Michael Purser, in Thailand. Michael teaches at the Thai Chinese International School in Samutprakarn, near Bangkok. He began using Touchstones materials in his seventh-grade class last year, and at the same time he was writing his doctoral dissertation on discussion-based learning methods. He had learned about Touchstones from his mentor in his graduate education program and wanted to  see what the method looked like and yielded in real practice. Fortunately, Touchstones was able to provide Michael with some initial training by including him in an Open- Enrollment Workshop last fall via the internet.

The school’s goals—which include developing critical thinkers, effective communicators, collaborative workers, and responsible global participants—and the Touchstones method and materials fit seamlessly together to reinforce a student-centered environment focused on 21st Century skills. As Michael’s students worked through their Touchstones program, he reported progress towards 100% participation within each discussion and a marked improvement in comprehension skills. As the school is trilingual (Chinese, Thai, and English), Touchstones programs additionally support those whose native language is not English to strengthen their speaking, listening, and comprehension skills in English.

After several months of using Touchstones with his seventh-grade students, Michael wrote that he saw all students participating actively during their discussions. He also observed during Touchstones that “students appeared to be on more equal footing in the conversation based on their assigned roles of Chairperson and Secretary… and they spoke voluntarily during the group discussions as opposed to being prompted by the facilitator.”

He further relayed that “the discussions were more inclusive, and collaboration seemed to be embedded in the seminars.” Michael also shared that his students said “they liked the flow of the discussion and that they thought all students participated more” in Touchstones than in other discussion-based formats they had been part of previously.

Based on those and other positive outcomes, this fall the school is expanding Touchstones throughout the middle and high school grades. They are also hoping to host Touchstones workshops in 2020 for teachers from across the region. Stay tuned for more from Bangkok! 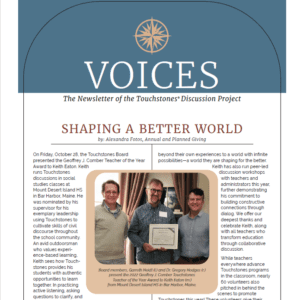