“This was a great and beneficial workshop, and I think Touchstones is excellent. I gained experience in how to develop discussion of an idea and how to activate effective interaction for students and teachers alike. I also learned how to support those who need it most.” 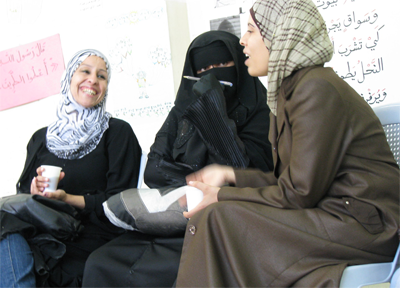 In Jordan, the Ministry of Education adopted a Touchstones curriculum in Arabic in 2010 for all students in grades 6-10 as part of Education Reform for Knowledge Economy Project (ERfKE). The creation of the Touchstones program in Jordan, known in Arabic as MaHakkaat at-Tafkir (The Touchstones Way of Thinking), or simply MaHakkaat, was funded by a number of sources, including the Institute for Intercultural Studies, Appleby Foundation, Sheik M A Shami Foundation for Human Services, private donors in the U.S. and Jordan, and the Touchstones Discussion Project itself.

The project is a collaborative effort between Touchstones, Ministry of Education officials, and Touchstones volunteers who first introduced Touchstones to Jordan and collaborated on early efforts there. Some of the project accomplishments from 2006-2010 included informal training sessions in Amman, work with a team of educators to try to form a core team of potential trainers, and the development of various Touchstones materials, which were then translated into Arabic and tested in the classrooms. Programmatic materials included the development by Howard Zeiderman, Touchstones Co-founder & President of a volume of Touchstones texts from Arab sources, called MaHakkat Aliph, which includes complete lesson plans for use in high school. That volume was translated for use in Jordan and subsequently was revised and augmented extensively for use in U.S. high school social studies classes.

The new volume, called Touchstones ’Alif: Readings from the Arab Tradition, was released onto the U.S. market in 2012.

Zeiderman also created custom lessons to accompany sections within Touchstones Discussion Leadership: Getting Started, which was translated, printed, and distributed to more than 8,000 teachers throughout Jordan. The accompanying lessons were designed to give groups of teachers the tools needed to practice their discussion leadership skills together on a monthly basis.

In 2010, Touchstones staff and volunteers traveled to Amman to run multi-week teacher-training sessions in coordination with the Ministry of Education. During their stay in Amman, the team trained more than 500 teachers in the Touchstones method using a modified Touchstones workshop and real-time interpretation. Touchstones programs in Jordan have reached more than 12,000 teachers and an estimated 500,000 students. 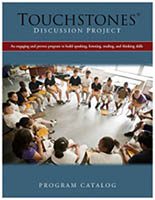